Mel Queen is the son of Mel Queen. Two different guys, two different careers. Same name, though. Not even a "junior" to tell them apart. 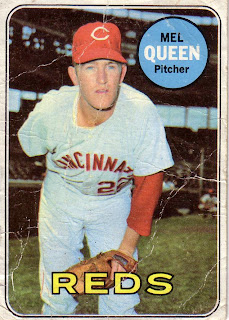 He had a solid career bouncing between the majors and minors with the Reds and Angels as both an OF and a pitcher. As a pitcher he had a career ERA+ of 114. Just sayin'. What I love is just the name, "Mel Queen." GSNHOF, I believe this man needs to be on the next ballot. It may not be the flashiest name in the world, but it's gotta be the least intimidating.

I really dig the back of this card. 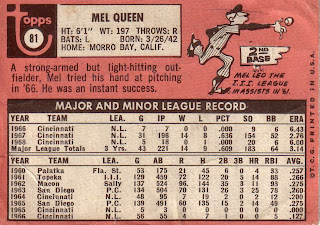 We get pitching and hitting totals. Bonus! Mel was a "strong-armed but light-hitting out-fielder." Man, those Topps guys from the vintage era could be a little brutal, couldn't they? Interestingly enough, Mel was not only a pitching coach for the Toronto Blue Jays from '96-'99, but he was also interim manager after Cito Gaston was fired in '97.

Money quote from his wiki page: "I just went to the mound and threw as hard as I could." Not sure if he was being serious, but it might provide some insight into the Jays approach to pitching in the late '90s. Clemens DID win back-to-back Cy Youngs under Queen's watch.