Ken knew his career had gotten off to a bad start...

when they told him to go have his baseball card photo taken during drills. Later, they just had him run water back and forth while everyone else worked on their curve balls. 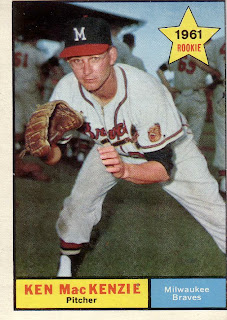 When Daddy D told me to go through an old common box from the vault this card really jumped out at me. The Rookie having his picture taken, the rest of the hopefuls in the background with their backs turned to the action. I haven't been able to identify the two complete numbers in the photo (61 and 69) but I'm guessing the guy on the far right is Joey Jay, #47, who was baseball's first bonus baby and the first Little League World Series alum to make the Majors. For the record, MacKenzie wore #36.

And man, we've all be Ken MacKenzie at one point or another: had that sinking feeling someone is letting us down easy, telling us to go clean up in the back while the real business is conducted out front. This card captures that profoundly human moment of nervous energy and worry, not knowing what's REALLY going on behind your back while guessing all the same. Awesome card.