With a last name like McCool, you know Billy was a smooth customer. 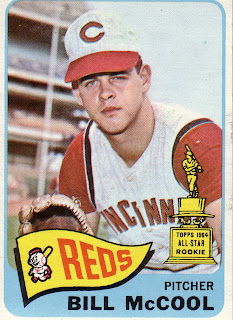 Billy, AKA MC Cool or Mr. McCool, had a seven year career for Cincy, the Pads, and St. Louis. He was a career reliever, with his best year coming in 1965 when he saved 21 game with a 4.27 ERA. Lifetime ERA+ of 103 which, by way of comparison, is a scant 2 point below that of Jack Morris. Make of that what you will.

Beyond the great design, I really like the large Topps Rookie AS trophies on these cards. I mean, it incorporates a top hat. Getting one of those as a rookie must have been absolutely boss. Too lazy to look up when Topps replaced that monster of recognition with the cup, but I imagine the first rookie AS class to come in under the new regime was a bit crestfallen.

The photo is really interesting, if only because the "player in the shadow of the corner of the left field foul territory stands"seems to have been something of a cultivated art of Topps photographers in the '60s.  I noticed it while thumbing through Daddy D's commons, and was planning to do a post on it, but I pulled 40+ cards. Of Yanki stadium alone.

As for McCool...the name says it all. 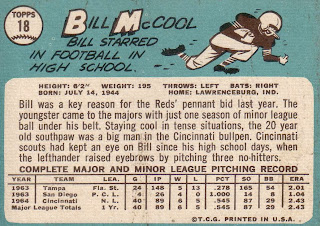