March to 300: CCs from Field of Cards

Quick edit to the last post: compa called me at work to remind me, "You forgot to say that Tony grazed my thumb. He grazed me thumb!" If I had that kind of attraction just by grazing their thumbs...anyway, I promised the compa I'd set the record straight.

Now on to just a few of the AWESOME cards I got from Field of Cards in a trade. 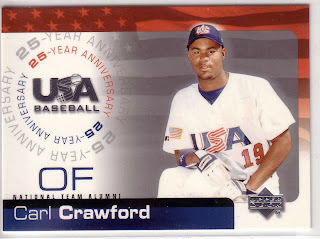 This one might be my favorite, CC playing for USA baseball back in the day.  It's not the WBC but the national team based out of Durham that plays in the Olympics, etc. The ONLY jersey I have of CC is one from the WBC I got on the mega cheap a few years ago (guess not too many folks dig some WBC jerseys), so it's pretty cool to have a card where CC is wearing a team USA jersey. 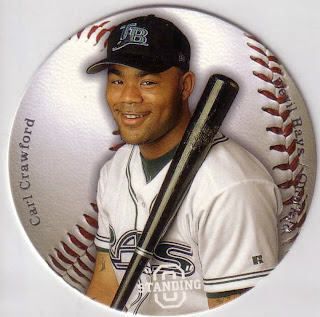 Anybody know what this is? An insert? A pog? I have no idea, but it's wild. The seams are raised and the card itself is textured, and the thing is cut round like a baseball. The photo has been used on about 15 different CCs (yeah recycling!), but as a design this is different. It may be a little high concept (for example, I can't imagine there are ANY action shots that would go with this design) but since I only have one of these I'll say it works! 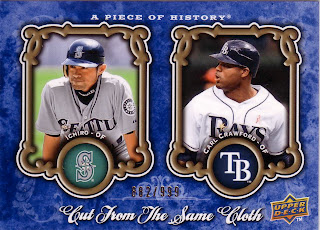 Now, it was really cool of FOC to toss this one in. I'd asked about it when he first pulled it but since it was a) an Ichiro and b) numbered it wasn't up for trade. No harm asking, right? Well, it made its way into the awesome CCs FOC sent over, and I have to say it really kicks ass. Ichiro is over there doing his thing on the left, with CC looking over with this kind of "WTF?" expression on his face. And it is a strange pairing for a card that says they are "Cut from the Same Cloth." They both steal some bases (CC more so than Ichiro), but Ichiro is a skinny guy (5' 9," 160) and a contact hitter with a high lifetime OBP .378, while CC is a larger dude (6' 2," 219) whose OBP is on the rise (.365 last year), but lifetime about .040 below Ichiro's. Hopefully CC can keep the OBP in Ichiro territory and Ichiro can start stealing some CC-quantity bases.

Dude also tossed in a '75 Seaver for my set (!) so I'm motoring forward on that one as well.

Posted by Carl Crawford Cards at 9:06 AM