The David Price Collection: The Jerseys

One of the things I wanted to do before leaving NC was get a Durham Bulls jersey. I actually got this one the year before we left, but when leaving was already and inevitability and compa and I were making active preparations for me to find a job and, well, leave. Sniff, sniff.

This is the jersey I got. It's a leftover from one from a charity game where they wear special jerseys that the players then sign and the team auctions off. This one was a couple of years old when I bought it because, well, the non-autoed, non-standard leftovers just don't sell. And I got it for about $25. For another $20 I got it personalized. I didn't get CC because I never caught him as a Bull. Instead, since compa and I had schlepped to Durham to catch his AAA debut (which, coincidentally, was also his first pro-loss), I elected to get David Price.

His number is 14 but when he got to the Bulls Calvin Medlock had that one wrapped up. So, Price went with 41. Oddly enough, later that year comp and I had a "dissertation escape day" when we went to Baltimore to see a Rays/O's day-night double header (best day ever!!!!!), and that's when I got Price's attention before the game and he signed it for me. The pic is bad, but he even put his old Bulls uni number, 41, below the auto. Really nice guy.
Than my in-laws (non-Daddy D category) gave me a Rays jersey for Christmas that year because I had been so stoked about the Bulls auto and, although I followed the Rays, HAD NO JERSEY. They got me Price instead of CC, which was cool because I'm a fan of both. Then Price started the year at Durham and, just as I was about to leave for my current job in ND, I had a mission: get the second jersey signed. 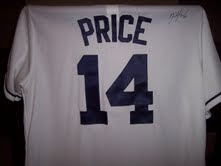 It was a cold, rainy day in April at the Bulls Fan Fest, and I sat quietly there for about an hour while players exercised. Price was throwing on the side for a while (literally right next to the fans at the DBAP), and the hounds were out in force. He kept telling them to let him do his job, then he'd sign, but that didn't stop them from asking over and over. After being told to wait individual hounds would then retreat, seeking out a player who was willing to sign right then. I mean, I'm a Bulls fans and I'd love to score a million autos or something, but if the choice is between getting an auto of a guy I'm a big fan of on a jersey and peppering the rest of the team, I'll just take the one I'm a big fan of and be done with it.
So, after all the waiting, I was right there when Price walked over. There was an immediate crush (initially of kids, the older adults) but since I'd been waiting right there for forever I was right at the front. Dude hooked me up and moved on. 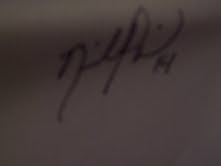 I'd also taken a 2009 Topps Heritage for him to sign, just in case the weather kept a lot of folks away (it did, but not enough), so I kept that in my pocket. On the way out I ran into a kid I'd been talking to about Price who had also gotten his signature (well before me). He was pretty stoked, looking forward to the season, etc. and since I had a spare I gave him the Price Heritage. He was dumbstruck a stranger would just give away such a valuable card (haha) but that was that. Gotta keep paying the little things forward.

Posted by Carl Crawford Cards at 9:41 AM