Rip Repulski Will Eat Your Children

OK, not really, but with a name like Rip Repulski it wouldn't be the most surprising thing in the world. 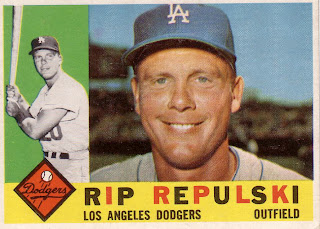 And don't let that smile fool you. That's the one has has while breaking legs and gouging eyes. Seriously, Rip Repulski steps into the batter's box and you're giving that dude a pass. Unless you're Bob Gibson, in which case you knock his a@@ down and dare him to do something about it.

Rip had a league average nine-year career (lifetime OPS+ of 98) for the Cardinals, Dodgers, Phillies, and Red Sox. He finished 4th in the 1953 ROY voting. Interestingly enough, Junior Gilliam finished 1st and every man's favorite runner up, Harvey Haddix, was 2nd. Rip was an All Star in 1956 and got into the game as a pinch hitter, going 0-1. And if you complain about the AS game now, get a load of this: Gus Bell started the game in center over Willie Mays. Regardless of who started, the NL manager Walter Alston let Bell get his at bat and then quickly replaced him with Mays, who went 1-3 with a HR.

Rips was also from Sauk Rapids, MN. I've driven to Iowa a couple of times since I moved up here, and it seems like every town within 100 miles of the Sauk River has "Sauk" in the name. At any rate, Rip passed in 1993 and was buried in his hometown. Maybe after the spring thaw I'll have to stop by and pay my respects to a guy with one heck of a nickname.