Topps Unique has taken a lot of heat from folks around, and deservedly so. The CC base card is a bit on the ridiculous side. However, this insert subset card is great. 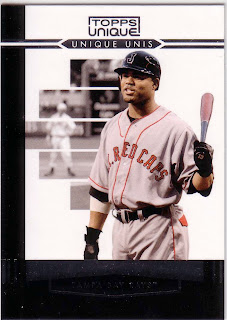 Negro League throwback uniform from the Jacksonville Redcaps. For me, what makes the card great is the shot of the other player (second baseman?) in the background. Topps seems to be going for some kind of "baseball cards from the future" feel for this set, but including a bit more context for the image of CC in the foreground solidifies the nostalgic impulse of the throwback unis. The contrast between CC (full color) and the anonymous player (b & w) is really nice, and the fuzziness of the other guy recalls older photos of ball players we've all seen.

For comparison's sake, here's the base card: 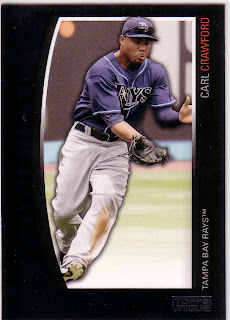 It's funny and has its charm, but the photo is overrun by the design. Moreover, for a guy best known for making a game-saving catch in the 2009 AS game who should have won a Gold Glove this year, this card makes CC look like, to borrow a phrase used to criticize Yogi Berra's play in the OF, "a man putting up a pup tent in a high wind." Not good.

Have a good one and good night Pumpsie Green, wherever you are!