Henry John "Dutch" Dotterer had a five year career catching for the Reds (57-60) and Senators (61). He was a light-hitting back up who, lifetime, racked up 1 SB attempt, for which he was caught stealing. 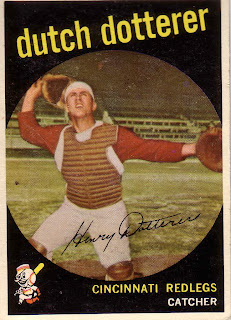 He we have him on his '59 Topps card, captured in a moment of religious fervor. I know, "he's obviously going after a pop up." Really? The stands are EMPTY, so there's no game. And the photo is taken from directly in front of Dutch, so the photographer would have to be standing between him and the pitcher's mound. So we can conjecture there's NO BALL in the air Dutch is tracking, either. Legitimate conclusion: the heavens have opened up and Dutch is rapt by the choir of descending angels. Sadly, and unlike Ivan Dejesus, who used his encounter with the divine to be traded for Larry Bowa and Ryan Sandberg, get out of Chicago, and get a career as a starter, Dutch had no suck, only appearing in seven games for the Senators in '61. 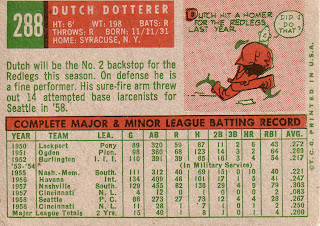 And Dutch couldn't even catch a break on the back of the '59, as the cartoon basically underscores he's a light-hitting catcher who'd be surprised he'd ever drive one out. For shame Topps, for shame!

Have a good one everybody and goodnight Pumpsie Green, wherever you are!
Posted by Carl Crawford Cards at 11:02 AM