OK---Ivan's epiphany isn't quite as dramatic as those experienced by most catchers, but check him out. 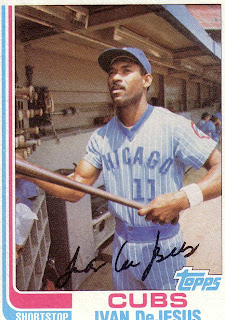 Ivan goes over to the bat rack and reaches in for a bat when he hears a voice. He looks up. "This is the bat I'm supposed to use today?" And who in Ivan's position wouldn't be asking for divine intervention? 1981 was his WORST year as a professional. He finished the year batting .194 in 403 ABs, an OPS+ of 44. Things were tough. He rebounded nicely the following year after a trade to the Phillies (OPS+ of 77) when his BA spiked by about 40 points. And as we all know, batting average on balls in play is all about luck, so who's to say that between getting traded out of Chicago and getting another 40 points on the old BA, Ivan wasn't the beneficiary of a little divine intervention?