I'm sure there are more cards of Maddux batting (like the 1990 UD) or at least brandishing a bat in a manner that would qualify for felony menacing were he out in public, but I'm not aware of them. Not sure the year/manufacturer of this card, but I can double check if anyone's wondering. 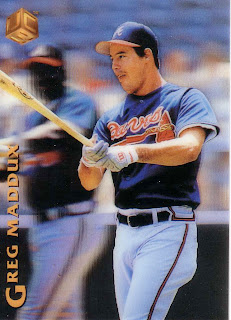 I know that piling on TBS's coverage of last year's playoff was a popular topic, but what all that mess was really about was the decline of regional sports broadcasting and the rise of sports networks that all report back to the same corporate headquarters (hello Fox). For years the Braves were America's team and their announcers did a pretty amazing job covering the Braves, even Chip Caray. They travelled with and knew the guys from the team, were dedicated to their job, and generally did an awesome job announcing. It was no surprise to me why TBS and Turner Sports basically axed their old schoolers when they switched over to a "more inclusive" format that focused on non-Braves games. Those dudes were Braves announcers. So was Caray. To put it another way, I have a PhD (surprising, right?) but if I had to spend the next 3 hours laying out the history of the 17th century British novel I'd sound like an idiot. I know just even about the topic to get WAY out of my depth.

So why the digression? One of the things the announcers always went on and on about was how proud Smoltz, Glavine, and Maddux were of their hitting. Placing bets on who'd hit more in a given weak, who'd finish the season with a better average, taking extra swings in the cage. The announcers were always talking about the big three and their HITTING. So as much as this is a Maddux card I feel like it's also an announcer card. Without what I got from Sutton, the Carays, etc. I'd have thought there was something weird or out of place, but there's not.

I'd like to think the photographer caught Maddux down at the cage getting ready to take some hacks and said, "Man, I gotta get this." If he followed his Braves he'd have known there was nothing unusual going on, just Maddux getting down to business.

Have a good one and good night Pumpsie Green, wherever you are!

Posted by Carl Crawford Cards at 8:36 AM