Oh man, what's not to love about this Hallelujah? 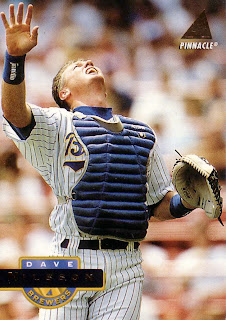 Is he turning to the crowd, asking for an "Amen"? Is he about to start speaking in tongues? A vision while chasing a pop foul? Whatever it is, Dave Nilsson is a more than appropriate addition to Catchers Finding Jesus.

Nilsson was a guy who played according to his own values and rules. For starters he is Australian and, when he was playing in Japan, had his name listed as "Dingo." He also retired from the majors at age 28 after his career year, 1999, when he had a career high OPS+ of 140 (versus a lifetime average of 110) and made the AS team. Why? Because he wanted to represent Australia in baseball in the 2000 Olympics. Praise the Lord good people, oh praise him!

Have a good one everybody and goodnight Pumpsie Green, wherever you are!
Posted by Carl Crawford Cards at 8:08 AM