I found this while digging through a common box Daddy D told me to go through. Technically it's a loaner, so it isn't mine, but it's one of those cards most kids dream about holding at some point. Adults too, I guess, if I qualify for the title. 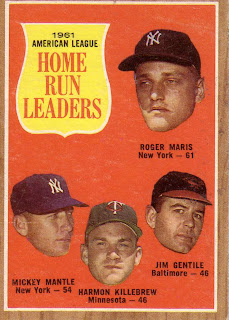 I did one of my first posts on Maris and ND, and I've done a lot more reading about Maris since I found out that the Roger Maris Museum is not only in Fargo, but in a mall. Apparently Roger wanted it to be free and in a place that was easily accessible to anyone who wanted to go. Still, despite that everyman inclination, most of the folks I've told about the museum think the concept is pretty gauche. "It's in a mall." Yep, being in my line of work definitely has its social downsides. I've been to the museum twice, and it's pretty cool. Moreover, it's just how Roger wanted it.

As for the card, the disembodied heads from this set have always bugged me a bit. I first saw these when I was in 3rd grade and a kid brought in a binder with a few of these in it. I mean, it's weird but really weird. The grouping of league leaders also underscores how random stats can be from year to year. On this card we have 2 HOFers, the guy who should still hold the record for HRs in a season and...Jim Gentile. No disrespect to Mr. Gentile, but '61 was his best season, and the only time he topped 40 HRs. In '62 he hit 33. Those were the ONLY two seasons he topped 30. And there he is being mentioned with Maris, Mantle, and Killebrew.

And correct me if I'm wrong, but Topps really had a problem with Maris topping the Babe, didn't they? The year the HR record gets topped (by someone OTHER than Mantle, I'll add) they come out with all these Babe tribute subsets. Huh?