Portrait of Pedro as a Young Butt-Kicker: Another NO Joint

The final card I'll showcase from that massive NO package: the '93 Fleer Ultra Pedro.

Despite being "Carl Crawford Cards," I LOVE pitching. Dwight Gooden was my first idol as a kid, and I've followed fire-ballers ever since. 1993 is well beyond my collecting days for all the reasons the rest of you are familiar with (teenage years, etc.), so I never had this card. It's awesome. 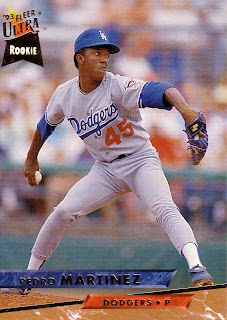 Let's be honest: Pedro doesn't so much look like he's unloading a fast ball as he looks like he's opening up a can of whup a@@ with his teeth. It always bothered me that Pedro was a notorious "head hunter" while Clemens was a "gamer" who played hard nosed ball the right way and wasn't afraid to throw inside. Make of that what you will, but this card captures all the ferocity of the early Pedro. Before the Cy Youngs, before the rings, just pure fire. 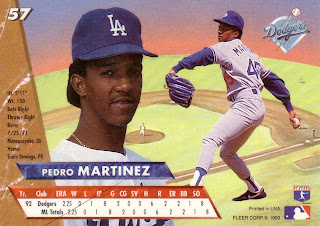 And then you've got the back. He's gotta be warming up in the action shot if only because he looks like he's playing in a church league softball game with that expression. And then in the portrait he was this quizzical "who, me?" kinda look to him, a nod to the later flamboyant, little person toting, Yankis are his daddy Pedro.

Thanks again NO. Have a great one everybody and goodnight Pumpsie Green, wherever you are!

Posted by Carl Crawford Cards at 10:41 AM