Gods of the Three True Outcomes: 1980 HR Leaders (AND a Grand Cards Contest)

First, MASSIVE contest over at Grand Cards. Go there, enter it, and come back.

Today's pic comes from 1980 Topps Baseball. If you haven't already, go check that blog out. It's awesome. Today's card is of two absolute a@@ kickers from years past. 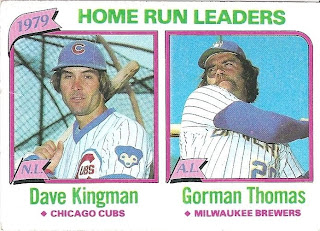 Dave Kingman. Gorman Thomas. There wasn't a whole lot of messing around with these guys: HR, K, BB. The "Three True Outcomes." OK, maybe not so much the BB, but you get the picture. These two had massive power and swung from their heels, and both are as famous for their HR output as their prodigious K numbers. In terms of OPS+ they are, career-wise, virtually identical: Kingman with 115 and Thomas with 114.

Kingman bounced around a bit while Thomas spent most of his career with the Brewers.

Gorman is also from Charleston, SC, and used to own a bar, Stormin' Gorman's, that was right up the street from my house. Stormin' Gorman's was long gone by the time I was of age, or at least old enough to pass as being "of age," so I never had a drink there, much less had the pleasure of meeting the man in person or have him serve me a beer. Especially since he was from Charleston he was one of the gods of my youth, untouchable for being a ballplayer and yet earthbound in appearance (his mustache that Brewers uni) and for being one of us, a kid from Charleston from the same ball fields as the rest of us. That made him all the more real to us, more real than Mattingly, Schmidt, or Brett if only because that connection made the far off teams in Atlanta, Baltimore, etc. more real to our lives, as if those were teams that WE could play for some day (none of us did). At any rate Gorman's mere legend added a bit more substance to our dreams, something he did by simply existing on cardboard or in a bar we'd never enter.