This card came over from the Night Owl. I bought exactly 2 packs of OPC, sent off the black border cards in trade to someone for the CC OPC base, and haven't looked back. As an aside, I never got my end of the trade (ahem) so I still need the CC base.

Anyway, the *Moments* subset was entirely new to me. The text at the bottom was puzzling (helps out at the plate and in the dugout?), so I was hooked. 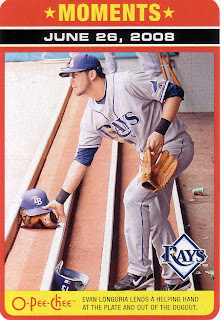 You turn the card over... 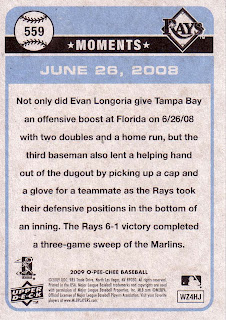 and there's more text about Longo grabbing someone's cap and glove from the dugout than there is about his offensive output for the day. Weird. That sort of thing is standard beginning in little league, and makes a really odd subject for a card, but I think it's kinda neat. Not that I'd like to see a whole series of cards detailing "guys taking other players' equipment out to the field," but this is the only shot like this I've EVER seen and it really connects the game's highest level with its lowest. I mean, we've all done what Longo was doing. Not many of us ever played a stellar 3B or hit towering HRs, but we've ALL taken stuff to our friends in the field. It's a strange but really nice card.

Posted by Carl Crawford Cards at 7:16 AM